It is now 4 years “Breeze Travel” company specializing in ecotourism has begun to spread propaganda among native and foreign peoples in Azerbaijan to have a favorable environment for all areas of ecotourism. With the professional team of the company, we are able to offer a wide range of tourism services in Azerbaijan such as village tourism, green tourism, photo ecotourism, extreme tourism, paragliding, trekking, hiking, canyoning, speleoturism, birds-watching, butterfly-watching, tent camping, velotourism and organizing trips with ski, horse, ATV and kvadrosik and all other types of ecotourism.

“Breeze Travel” company travels to forests, sources, mountain creeks, teas, sea, highest peaks, world-famous highlights with nature richness and fascination, healing Istisu in forests and other natural health centers from the heavenly corners of the world. At the same time, our ecotourism team is constantly engaged in educational tours. We think that this potential assessment and development is only the task of the tourism companies operating in the country, as well as each of the Azerbaijanis.

You may find the most attractive places with magnificent nature below:

There are 850 mud volcanoes in the world, and over 300 of them are in Azerbaijan. Our country is a world leader, not only for the number but also for the activity of its volcanoes. Most located on Absheron, around Baku. That is 100 near the Gobustan reserve alone. There are another 200 on the islands of the Baku archipelago and in Shamakha and Shirvan Districts, two hours’ drive from Baku. There are far fewer mud volcanoes in Iran and Turkmenistan; they also found in Pakistan, Ukraine, Columbia, Trinidad, Roma. etc.

In 2001, one mud volcano 15 kilometers from Baku made world headlines when it suddenly started ejecting flames 15 meters high. Gobustan mud volcanoes were included as one of 50 natural wonders by CNN Travel. Many geologists as well as locals and international mud tourists trek to such places as the Firuz Crater, Gobustan, Salyan and end up happily covered in mud which is thought to have medicinal qualities.

Azerbaijanis and anyone visiting the Land of Fire can now enjoy the magnificent view of one of the most beautiful places in the country – Goygol Lake.

Located some 4 hours way from the capital of Baku, Goygol is the adornment of Ganja region.

A large mountain lake surrounded by the mountains of the Lesser Caucasus was formed as a result of a devastating earthquake that destroyed the Kapaz Mountain in the 12th century.

The color and clarity of the waters of Goygol Lake, located 1,600 above sea level is striking. The banks of the lake are covered with forests and rich of flora and fauna.

This area is ideal for swimming, walking, travelling, and family picnics. Recreation on the shore of the fresh lake is the best decision on hot days.

Azerbaijan is historically called the Land of Fire. At a whim of nature, the land of this Caucasian country located on the picturesque coast of the Caspian Sea, is replete with underground sources of oil and gas that long for blowing out. Natural gas in the Azerbaijan bowels is so much that it comes to the surface over and over again.

In some places, a match dropped accidentally or deliberately, a torch, or any spark can ignite the gas, which will keep on burning until it fully exhausts. In times of old, Azerbaijan was a country of fire-worshipers, followers of the Zoroastrian cult.

People believed that fire sources were the manifestation of divine power.

They worshiped them, building altars and temples.

One of the most famous and popular tourist places of the “eternal flame” in Azerbaijan is the mountain of Yanar Dag. Actually, it is rather a hill than a mountain, with natural gas burning on its slope from ancient times. Meter-long tongues of fire are licking the stratified earth approximately for 10 m in width, searing those who approached too close. People occupy the benches to watch the blazing hill in the evening, when the its sight is most effective. 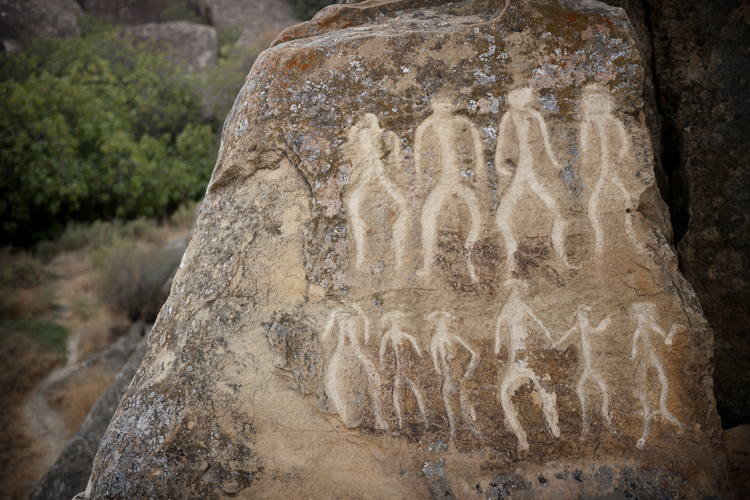 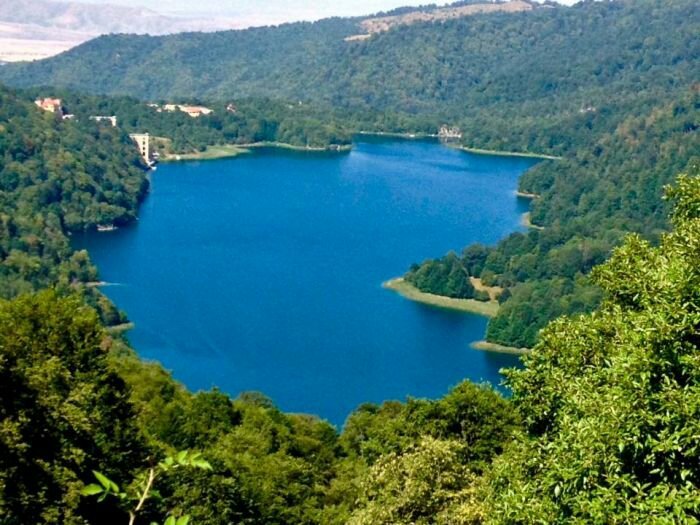 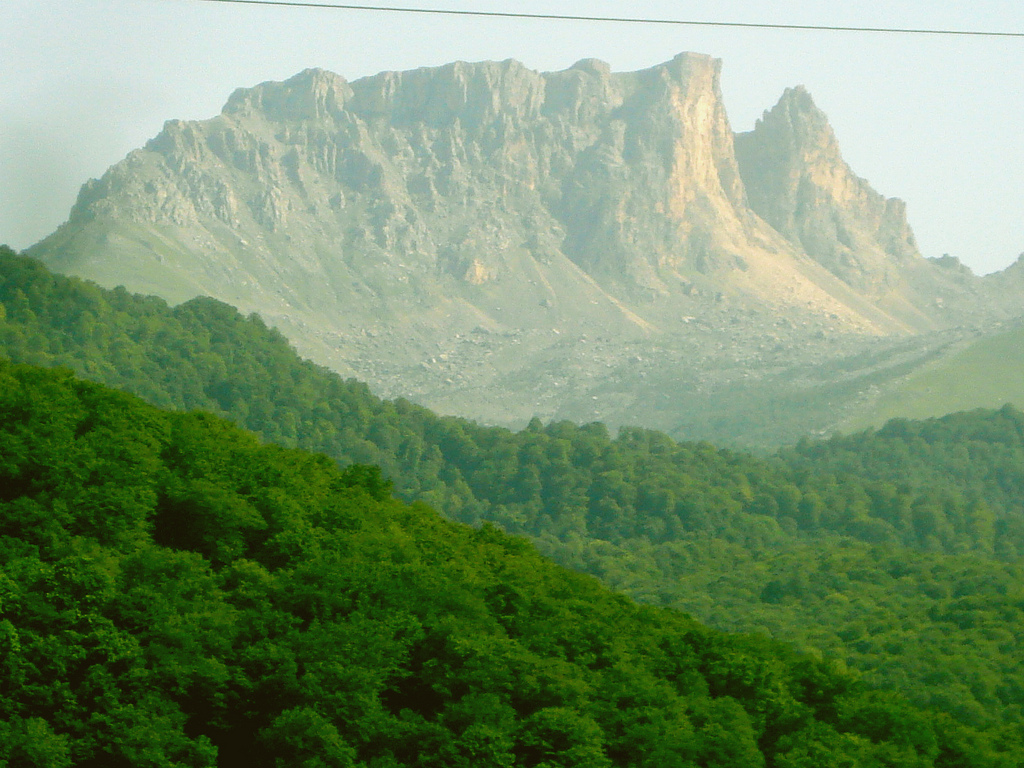 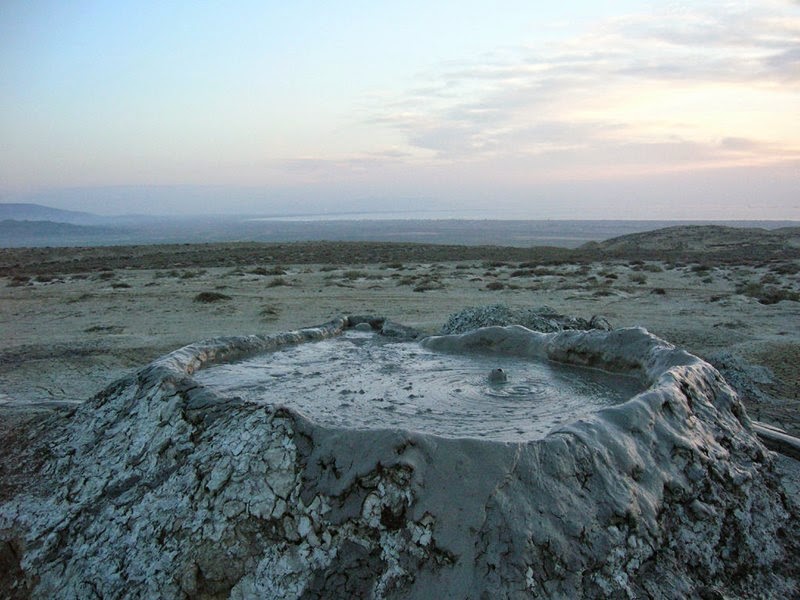 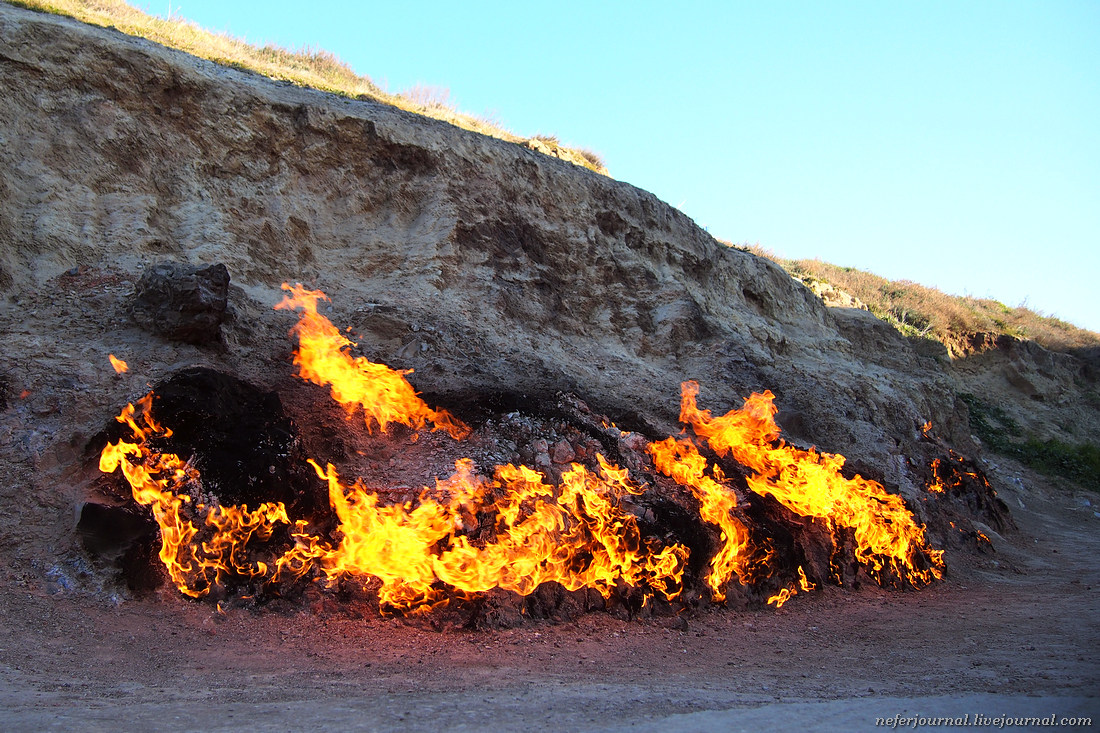